Choose the format that best suits your project

Your tracks will be mastered for CD production and supplied as DDPi files. Max length 79 mins.

We take great pleasure in delivering audio masters that perfectly suits the project and the requirements of the artists / producers. A quick look at our discography will show a wide diversity in musical genres and sounds, many of them won critical reviews and awards.

Please use our price calculator below to begin your mastering project.

If you need information about Stem Mastering or our other services such as Mixing and Recording, please click Next button and write to us in the Message section. 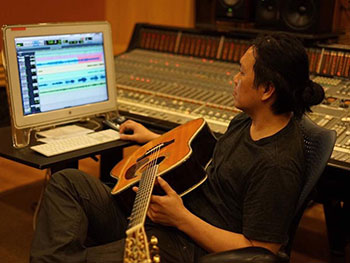 Having won eight Anugerah Musik Indonesia (AMI) Awards has led Stephan Santoso to be recognized as one of the most prominent audio engineers in Indonesia’s music industry.

Early in his teen years, Stephan was already active as a semi-professional musician, in bands and also as a session guitar player in various recordings.

Eager to learn much more about audio production, he enrolled for education in Recording Arts at Full Sail University in FL, USA, graduating in 1997.

Stephan started his full professional career in the music industry as an A&R (Artists & Repertoire) and staff sound engineer at Sony Music Indonesia from 1997 to 2003. During the period, he was also doing projects as a producer and composer for some of Sony Music’s artists.

Since 2003 onwards, Stephan has been focusing on his own Slingshot Studio, specializing in mixing and mastering service.